Since ancient times, alfalfa has been used as a medicine in Ayurveda. It works well as a treatment for arthritis and digestive issues. Alfalfa has a variety of vitamins, minerals, and bioactive compounds, which contribute to its many health advantages. You can consume alfalfa (also referred to as Medicago sativa) as supplements, sprouts, dried leaves, and seeds. Alfalfa consumption can help with menopause symptoms relief, blood sugar regulation, cholesterol reduction, and cellular damage reduction. This article has covered the potential advantages and disadvantages of alfalfa for your skin, hair, and health. 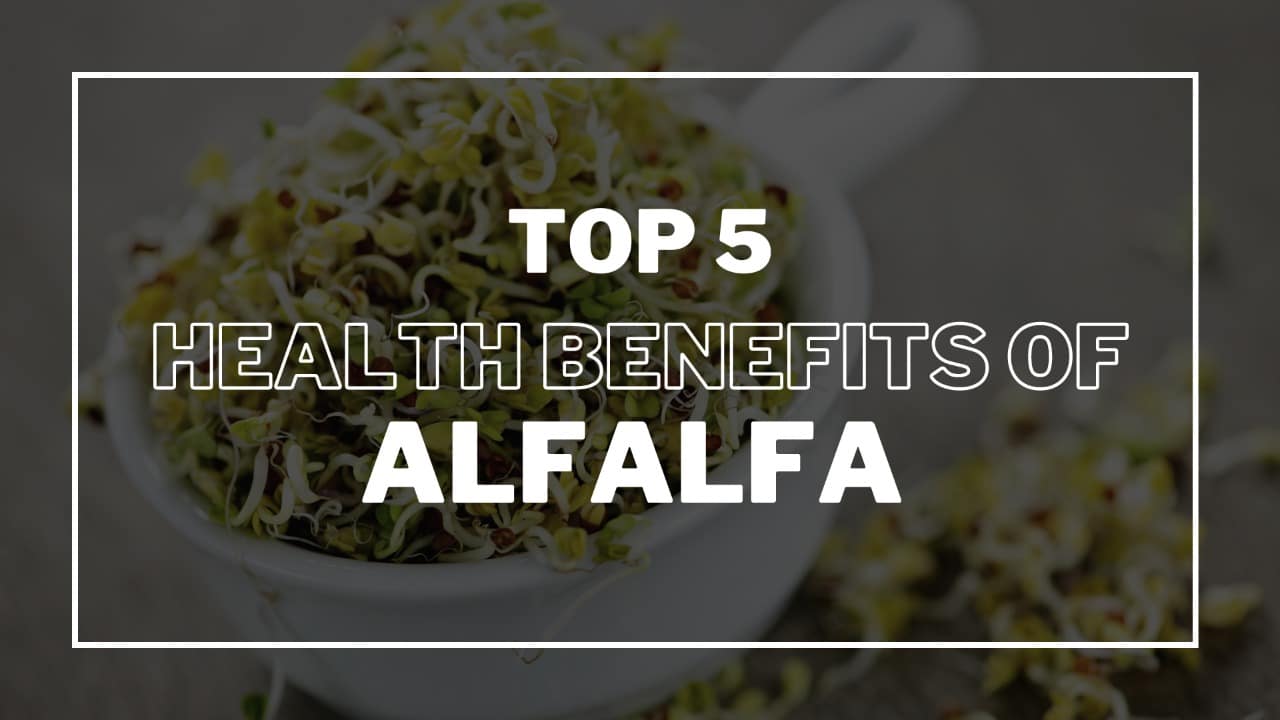 Alfalfa is rich in minerals and vitamins:

Despite having few calories, alfalfa is a powerful food because it contains several essential nutrients. Minerals, vitamins, and other abundant nutrients in alfalfa help you maintain a healthy body. Specifically, vitamins A, B1, B6, C, D, E, G, and K are present in alfalfa. It is also abundant in calcium, silicon, potassium, phosphorus, iron, zinc, magnesium, sodium, chlorine, and beta-carotene. Alfalfa contains a wealth of vitamins and minerals in addition to bioactive substances like alkaloids, coumarins, flavonoids, and phytoestrogens. These substances could aid in the prevention of diseases like cancer and heart disease.

Alfalfa may help lower cholesterol levels:
Saponins, a class of plant chemicals, are abundant in alfalfa. Fusing bile salts and cholesterol in the body may lower serum cholesterol levels. Alfalfa’s saponins were found to lower blood cholesterol levels in a study on monkeys. However, more extensive research is required to comprehend this benefit for humans fully. Another survey of 15 hyperlipoproteinemic patients discovered that consuming 40 g of heated alfalfa seeds for eight weeks reduced bad low-density lipoprotein and total cholesterol (LDL).

Alfalfa could help relieve osteoarthritis:
Alfalfa stem pectic polysaccharides were found to have anti-inflammatory properties. These could aid in the treatment of rheumatoid arthritis and osteoarthritis. In a different investigation, alfalfa ethyl acetate extracts were discovered to inhibit the production of pro-inflammatory cytokines. These might aid in treating mice with inflammatory conditions. More research is required to comprehend this phenomenon in humans at the molecular level.

Alfalfa may Help Reduce Cellular Damage:
Alfalfa’s antioxidant properties may lessen the cellular harm brought on by free radicals. Disorders of the heart, central nervous system (CNS), and metabolism may be effectively treated by it. The excellent antioxidant compound alfalfa may reduce cellular harm by iron oxide nanoparticles. The L.R. Institute of Pharmacy researched that alfalfa may have cerebroprotective qualities. These work with their antioxidant qualities to lower the risk of cerebral ischemia (stroke). According to a rat study, alfalfa may have an antioxidant effect against liver damage and oxidative stress by carbon tetrachloride. More research on humans is needed to comprehend the advantages of alfalfa fully.

Alfalfa could help minimize menopausal symptoms:
Alfalfa contains a lot of phytoestrogens that can be used to treat menopause symptoms. These come in two varieties, alfalfa-coumestrol and genistein, and are chemically comparable to the hormone estrogen. A particular product made from alfalfa extracts has been shown in a study on 30 menopausal women to be effective in treating menopausal symptoms like hot flashes, vaginal dryness, and night sweats. Users of alfalfa were found to be less likely to experience sleep interruptions, according to a different study on breast cancer survivors conducted by the Beckman Research Institute.

Alfalfa could be helpful for weight loss:
Alfalfa sprouts’ fiber may aid in weight loss. Combined with routine exercise and adequate rest, it might help one stay satisfied while promoting healthy weight loss. Direct research is lacking in this area, though. Alfalfa sprouts are essential to include in the diet of anyone trying to lose weight because they have only 23 calories per serving. Additionally, because they are high in protein and fiber, they promote satiety, which prevents overeating and the next intake of excessive calories.

How To Use Alfalfa?
Alfalfa seeds should be added to a bowl or jar of water and allowed to soak for 8 to 12 hours to sprout. The seeds should be drained and cleaned. Let them stay at room temperature in a sunny area for three days after removing as much water as you can. Every 8 to 12 hours, give them a rinse and a drain. After three days, relocate the seeds to a location with indirect sunlight and keep giving them an occasional rinse. After five or six days, they ought to be edible.
Alfalfa juice can be an excellent way to get the most nutritional value and freshness. Alfalfa sprouts are a delicious addition to salads and sandwiches. They can also be added as a garnish to soups or tacos or used in summer rolls. Alfalfa can also be purchased dried. Dried alfalfa can be ground up and added to smoothies or boiled in water with other herbs to make a tea.

Conclusion
Alfalfa can help you with many health problems and offer many health benefits. Additionally, it enhances immune function, detoxifies the body, speeds up healing, and lowers inflammation. In addition, it has anti-cancer qualities. Check out the Pure Organic Alfalfa Powder by AE Naturals to reap out its benefits. Visit today!

No products in the cart.